eSSENCE at the 10th IEEE international conference on e-Science

eSSENCE at the 10th IEEE international conference on e-Science, Oct 20-24 in Guarujá, Brazil 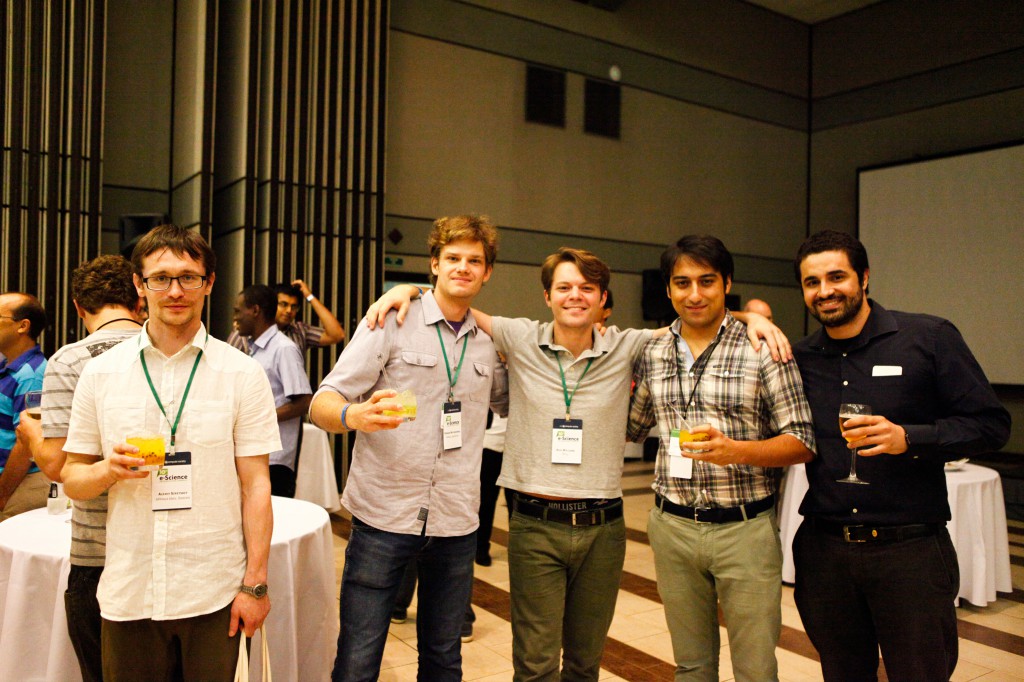 The IEEE International Conference on e-Science is a yearly meeting that provides a snapshot of the scope and breadth of global e-Science research. Work presented by international groups and communities of developers and users of e-Science applications and enabling IT technologies, provides an outlook of the challenges and opportunities facing the future of e-Science.

Researchers in a growing number of disciplines are increasingly adopting digital tools, techniques and practices. They are building communities and projects that span multiple disciplines, laboratories, organizations, and national boundaries. The themes covered in the conference span all the major disciplines of e-Sciencee in the Arts, humanities and social sciences, Bioinformatics and e-Health; Physical Sciences and engineering; Climate, environment and earth Sciences; Data science, data management and digital repositories; Cyberinfrastructures, cloud computing; e-Education and the practice of e-Science.

The conference was attended by scientist from 24 different countries, with more than 450 papers submitted. Naturally, a large proportion of the presented works were from Brazilian research groups, some of which showed interesting e‑Science applications to local problems, as is the development of decision tools that collect, analyze, process and synthesize voluminous geo-referenced data for sugarcane agriculture or the involvement of citizens in the creation of correct and up-to-date deforestation maps. With more than 100 million broadband internet subscriptions, of which ¾ are mobile, Brazil is very active in the relatively new area of Citizen Science, where non-scientists are engaged in systematic collection and analysis of data.

Each session had three 20-minute presentations which left plenty of time for discussion and interaction.

In addition to a poster session, scholarship students from universities and institutes from all over the world had the opportunity to present their work in a very well organized session of more than 40 two-minute pitches. This was a real highlight! 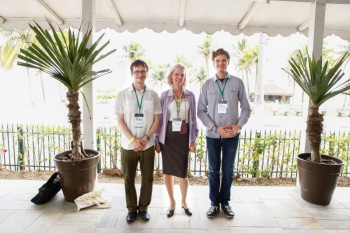 Alexey Siretskiy, Ingela Nyström and Damian Matuszewski from the IT Department at Uppsala University

Three members from the eSSENCE community contributed to the conference: Ingela Nyström, professor of Visualization at UU, chaired the session on “Cyberinfrastructure”, Alexey Siretskiy, a post-doc at the IT Department at UU made an oral presentation of his work on HTSeq-Hadoop, and PhD student Damian Matuszewski from the group on Visual Information and Interaction at UU, presented a poster.

Ingela Nyström, Director of eSSENCE, and former eSSENCE coordinator Sverker Holmgren are both members of the program committee.
Next year’s conference will take place in Munich, Germany, 31 August – 4 September, 2015.

The conference includes two days of workshops aimed at exploring in greater depth particular questions of interest to a wide number of e-Science groups. This year’s topics were “Digital Humanities and e-Science”, “Tools and Technologies for Virtual Laboratories” and the “Microsoft Research e-Science Workshop”.

Digital Humanities – Research in the humanities with intensive participation of computer resources is becoming well-established in academia. The use of intensive computational resources in Philosophy, History, Geography, Social Sciences, Linguistics and Letters, Education, Economics, Law, Anthropology, Archaeology, Communication Studies and Information Sciences is not only allowing for more efficient ways of answering traditional questions, but also transforming the kinds of questions that humanists have traditionally posed. In this sense, Digital Humanities are creating new theoretical questions, analyses and studies.

Tools and Technologies for Virtual Laboratories – Virtual Laboratories are, in a broad sense, environments for experimentation using distributed information and communication technologies. Virtual laboratories are enablers of e-Science applications: they can be designed for data collection, processing and dissemination, for long-term storage of data, documents and workflows associated with e-Science applications as well as to provide access to otherwise inaccessible data and/or expensive real instruments. The workshop presented a number of virtual laboratory solutions such as the Australian Urban Research Infrastructure Network (AURIN – www.aurin.org.au) which supports Australia-wide research in and across the urban and built environment. This e-Infrastructure has been designed to ensure that peak loads can be predicted and successfully coped with, as well as to avoid wasting resources during non-peak times. 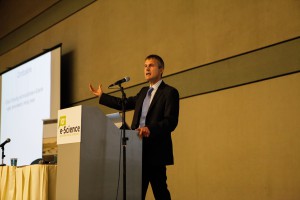 Each year, Microsoft Research presents the Jim Gray e-Science Award to a researcher who has made an outstanding contribution to the field of data-intensive computing. The award—named for Jim Gray, a Technical Fellow for Microsoft Research and a Turing Award winner who disappeared at sea in 2007—recognizes innovators whose work truly makes science easier for scientists. The recipient of the 2014 Jim Gray e-Science Award was Paul Watson director of the Digital Institute at Newcastle University in the UK. His contributions to e-Science over the past 10 years include establishing a leading center in support of the UK e-Science Initiative. Since 2007, he has focused on the design of e-Science Central, a cloud-based, science-as-a-service platform that has become a main research vehicle in such areas as provenance, scalability, formal methods, and federated clouds.

This year’s workshop also included a number of interesting general discussions for the e-Science community in the form of panel debates: “The strategic importance of e-Science” took up, among others, the often undervalued role of e-Scientist across academia, and the importance of “Going Native” — a reference to the necessity of bridging the gap between application/experimental scientists and the computing that underpins their discoveries.

The complete program may be found at http://research.microsoft.com/en-US/events/escience2014/agenda.aspx 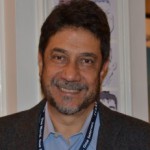 Virgilio Almeida, Secretary for Information Technology Policy of the Ministry of Science, Technology and Innovation of Brazil (Professor of Computer Science on leave of absence) gave an insight into the strategic importance of e-Science applications and e-Infrastructures in the continued expansion of the Brazilian economy. As the world’s seventh largest economy, Brazil depends on good internet governance and innovative e-Science applications for the growth of its industry and business sectors.
The two academic keynote lectures this year represent two rapidly growing areas within the Digital Humanities: e-Social Sciences and e-Linguistics:

Noshir Contractor, Professor of Behavioral Sciences at Northwestern University, USA, presented his work on social phenomena through the analysis of big data to address Grand Societal Challenges. His research focuses on investigating factors that lead to the formation, maintenance, and dissolution of dynamically linked social and knowledge networks in communities. Specifically, his research team is developing and testing theories and methods of network science to map, understand and enable more effective networks in a wide variety of contexts including business communities, science and engineering communities, disaster response teams, public health networks, digital media and learning networks, and in virtual worlds, such as Second Life. 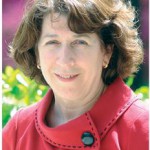 Kathleen R. McKeown, Professor of Computer Science at Columbia University, USA, presented research showing how language analysis can benefit science and the society. By bringing together natural language processing researchers with researchers from other scientific communities, one can exploit information extracted from text sources to address scientific problems. An example of an application is the prediction of the future impact of a scientific concept—represented as a technical term—based on the information available from recently published research articles. Another application with great societal impact is text analysis of media coverage of past disasters for predicting the impact of future tumultuous events on our infrastructure, environment, economy and society. Finally, she gave a glimpse of how language processing is changing the way literary analysis will be done in the future.